BACKGROUND TO CUVEE AUX ANTIPODES
“I would place it alongside any Burgundy Grand Cru. Very, very impressive” – Huon HookeThe Antipodes Cuvee’s are made by Francois Millet, former winemaker at the iconic Chambolle Musigny estate of Domaine Georges Comte de Vogue and now his own Domaine Francois Millet et Fils in partnership with Paul Pujol from Prophets Rock. This friendship began when Paul worked for Francois at Comte de Vogue during vintage as an assistant winemaker to Francois. Paul invited Francois’s son to visit New Zealand to offer the same insight and during his son’s visit Francois decided to come out and visit Paul as well to see the winery. He loved the site Prophet’s Rock has in Bendigo Central Otago and the two of them begam discussing working together on a joint project, which came alive with the first bottling in 2015.To be clear it’s not simply a few emails sent by Francois from France instructing Paul on when to pick, when to rack etc. Francois is fully invested, making two trips every year to New Zealand to work with Paul on the vineyard, winemaking and elevage. Francois even insisted on exporting the same brass hand pumps from Burgundy to ensure that the wine was made using the same tools he uses in Chambolle.
In the 2020 and 2021vintages it’s been impossible of course for Francois to travel to New Zealand however he has been involved as much as possible with regular consults with Paul. 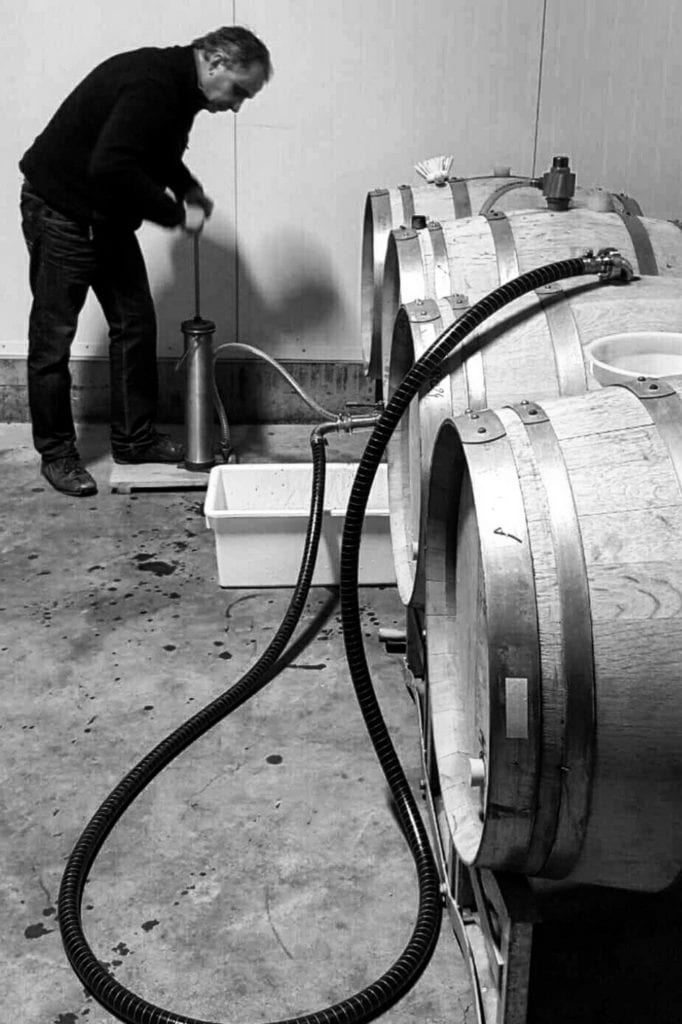 Collaborations are not new between great Domaine’s or winemakers from the old world with their new world counterparts. What makes this collaboration so authentic is Francois continues to visit Prophet’s Rock twice a year to overseas key phases of making this special Cuvee.

In addition he is adamant that to truly express his involvement authentically it has to be made using the same methods he lives by at Comte de Vogue. That means using exactly the same Brass hand pump for movement of wine, hand racking using a Taste de vin on each barrel as his does in Chambolle, no pigeage, same coopers and toasting regime.

WINE SPECIFICATIONS
100% destemmed from one parcel (same every year) of the home vineyard at Prophet’s Rock. This site has the most shallow soils, just 50cm before the vines meet the Clay and Pedogenic limestone mother rock. Vinified in tank with one plunge by hand. Aged in 33% new oak for 17 months. Racked cask to cask, unfiltered. Remond Troncais cooper (Allier), same Francois uses in Burgundy.“The vineyard sits on a high elevation (320 – 390m), steep glacial terrace high above the valley floor. The site features some of the oldest vineyard soils in the valley with the formation of the terrace occurring approximately 650K years ago. The soil age and dry Central Otago climate have combined to create the unusual clay and pedogenic lime soil structure. Beneath layers of clay at a depth of 50-80cm sits a thick layer of chalk. The 7.5ha site was prepared and planted between 1999-2001 and the parcel of Pinot Noir for this wine is a single clone at the western end of the steep front face. Full organic certification (Biogro) was completed prior to the 2018 vintage” – Paul Pujol – Owner“I would quote Jean-Claude Debussy: “Music is silence between the Notes”, Meaning empathy and respect to emphasise the beauty of the terroir and bring relief to the wines.(the peaks are the notes and silences the valleys). “We have this angel, the pinot noir, and the wine is the voice of the angel. When you use too much extraction, too much oak, too many additions and manipulations, you obscure the voice of the angel.”- François Millet

“Complex, detailed and captivating bouquet of Pinot Noir – aromas and flavours of red fruits and wood spices – a seamless connection to earth & mineral layers. The texture is tense and very youthful – all locked up and not quite ready to reveal – but the quiver of spice and tannins with acidity and a core of fruit shows what’s to come. The wine is also very pretty with a rose and perfume scent, some wild dried herb and spice. Decant for service if you can’t wait. Best drinking from 2021 through 2027+” – 98 points – Cameron Douglas

“A collaboration wine between Burgundian Francois Millet and Prophet’s Rock’s Paul Pujol. This makes a very harmonious impression on the nose with red cherries, spice, hazelnuts, red florals, fresh tobacco and light earthy nuances. The palate has a very neatly coiled and layered feel with tannins that unfurl and lift the finish. Red-cherry and pastry flavors are delivered in vibrant mode. Some blueberries, too. Drink or hold” – 96 points – Nick Stock – Jamessucking.com

“Deep red colour with a strong purple tint. The bouquet is fresh and vibrant and loaded with dark fruit aromas, cherry uppermost, spices and dried herbs touches. Oak is apparent early but recedes into balance with exposure to the air. The palate opens with powerful flavour and marked acidity. A concentrated, powerful and beautifully poised wine with energy and vitality, intensity and complexity, great pinosity and drive, with ample tannins backing the flavour but not tough or aggressive as Bendigo tannins can be. The aftertaste is very persistent and harmonious. This is a great wine. I would place it alongside any Burgundy Grand Cru. Very, very impressive” – 98 Points – Huon Hooke

The grapes were sourced from the Home Vineyard on the impressive North-facing slopes of Chinaman’s Terrace, located in the Bendigo sub-region of Central Otago. Planted in 1999/2000 and will be certified organic from the 2019 vintage. Starts at 325 meters above sea level, rising up to 400 meters. North West exposition. This stunning site has soil featuring clay and chalk mixed with schist and quartz. To understand the soil type here it’s important to know how the Cromwell Basin was formed.

The site is a mixture of Clay and Limestone. The terrace was formed/carved by a glacier, 650,000 years ago. Then a second Glacier came 400,000 years ago to form further topography changes. Due to the first Glacier creating the first terrace the schist mother rock was left exposed on the top soil. Schist weathers and decomposes becoming fine particles, eventually Clay. Calcium particles within this Schist were released during this decomposition. Because there is Clay it stopped the calcium being washed away creating a layer of calcium on top of the Clay. Then this changes to chalk/calcium carbonate = Pedogenic lime. The low rainfall of the Bendigo subregion (dry) also helped to retain this soil.

This then gives a sandwich of clay/windblown topsoil, limestone and then more Clay. In conclusion – The combination of Clay, Time and Dry climate = gives the possibility to create limestone in an area with no former sea. Pedogenic lime is formed by slow formation of time as opposed to the sea being forced up from below (Paris basin/Burgundy). It’s a lot younger than the classic limestone found in France. Iron oxide is also present in the sub region.

Low yields = 35hl/ha. The grapes were handpicked and destemmed with a high proportion of whole berries going into the fermenters. Wild ferment. Just one pigeage approx per vintage. The wine spent 17 months in French oak barrels of which 30% were new. Bottled unfined, unfiltered