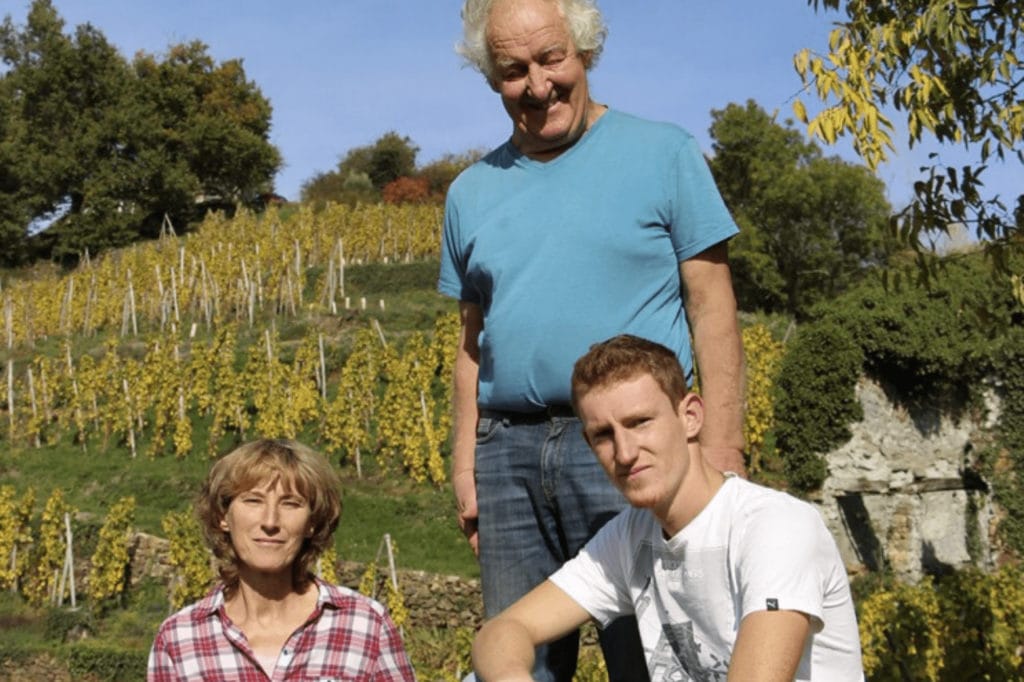 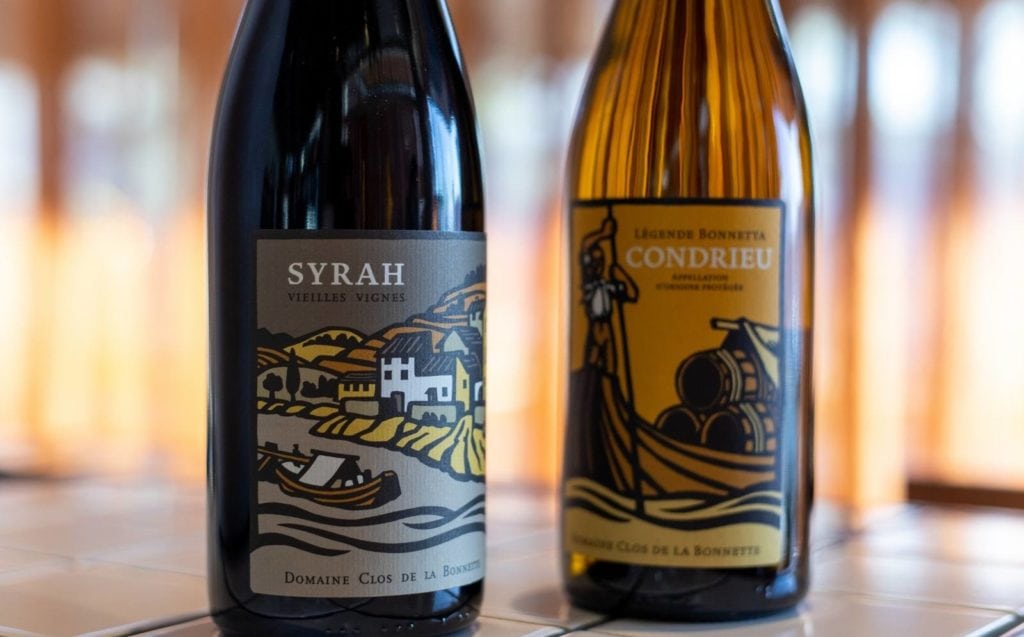 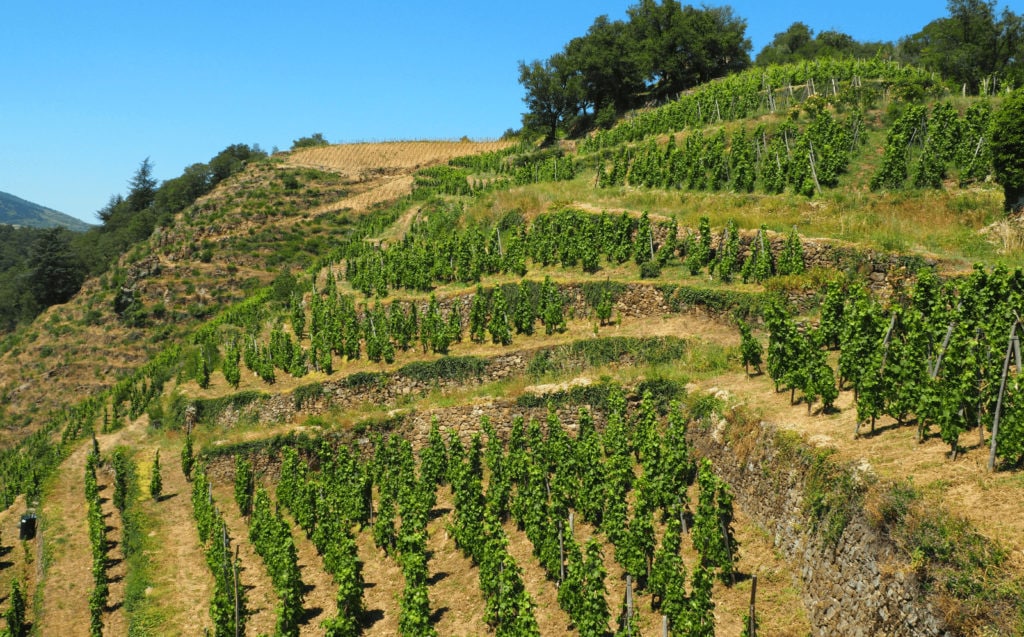 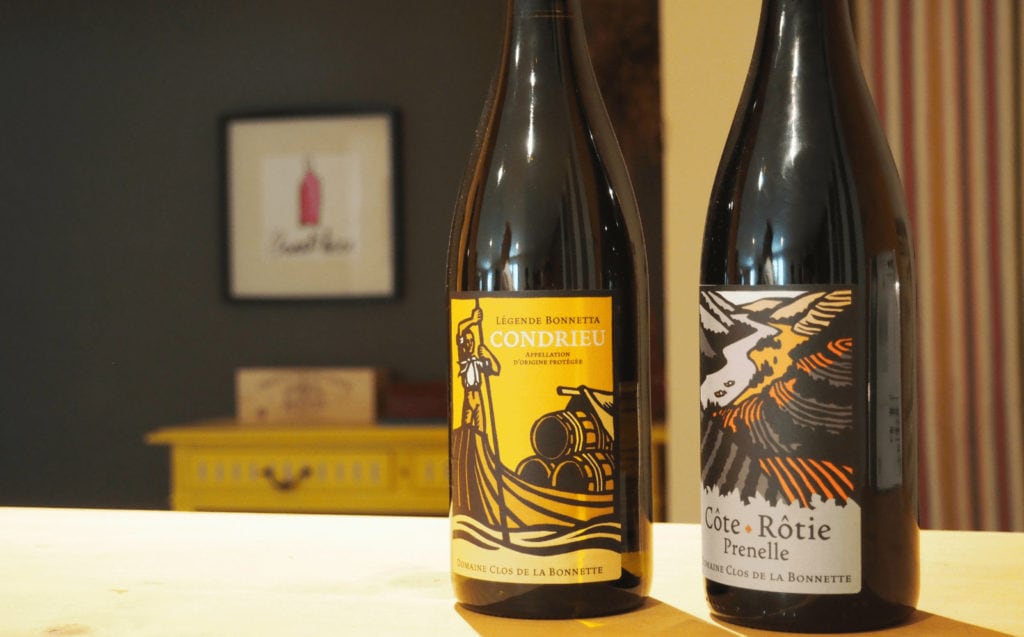 “One of the few domaines to work organically on the tricky granite terraces. Isabelle and her husband Henri worked five hectares of fruit and vegetables – also organic since 1970 – before giving up that activity due to his ill health. He is a mason, and built their house. The first vinification was in 2009. From 2016 there is small scale [3,500 b] Côte-Rôtie made by son Antoine from 1970s Syrah on Prenelle on the Coteau de Tupin. In 2019 a second Côte-Rôtie was started from a 0.4 ha vineyard of Isabelle’s ex-husband’s family [Gérin], that had previously been rented to Jean-Michel Stéphan. There is a gem of an IGP Collines Rhodaniennes Syrah Vieilles Vignes. Antoine looks after the reds (son), Isabelle the whites”. – John Livingstone-Learmonth – drinkrhone

“Organic is really what I consider is good, I truly feel that. I make the walls, clear scrubland for planting, look after the vines, make the wine. It’s a big challenge, but I’d like to think that at least one time in my life I could offer God the quintessence of the place: the climate, my savoir faire and the place might all come together in one year.” – Isabelle Guiller – owner

“The vineyard was saved in 2019 by the August rain, around 60 cm (2.2 in) in three to four falls. I wanted to harvest early to avoid the rapid rise in degree, so it was important to take as little time as possible to assemble the team. The vineyard was blocked before the rain, like it was in 2018, then after the rain there can be a gain of 2° in a week.” – Isabelle Guiller – owner

If you put a monetary return on all the work involved in both restoring this vineyard and actually farming the site you just wouldn’t even consider digging the first post hole. Every time I visit this incredible terraced site I just look around in disbelief that anyone would even attempt what they have and are still doing here in Condrieu.

Domaine Clos de la Bonnette was purchased in 1992 by the wife and husband team, Isabelle Guiller and Henri Montabonnet. Isabelle had her eye on this abandoned vineyard site for many years before they moved forward. The main reason that the site remained unoccupied was because the hillsides were in complete disarray, as many of the stone retaining walls had collapsed over the decades due to neglect. Restoring this property could only be done as a labor of love, not a commercial venture.

Henri did most of the restoration himself, rebuilding the walls by hand. Isabelle took on the task of cultivating the indigenous flora around the property, making it more biodiverse. Because of the location of the vineyard, Henri and Isabelle are surrounded by forest, a creek and another hillside of ruins. This natural barrier allows them to more easily produce organically, a process by which they have farmed since they began replanting.

The quality of the fruit is so high that Marcel Guigal wanted to purchase their grapes and put them under contract. Thankfully, they politely declined. Due to narrow terraces & steep slopes, the site is unsuitable for mechanical harvesters, tractors or horses. So everything must be done by hand.