Without question after over 20 years producing wine Lucien le Moine is one of the most exciting and sought after producers in Burgundy. Mounir seems to so often be labelled a ‘modernist’ due to his passion for the inclusion of large qtys of lees, long elevage technique, no sulphur use during elevage and no racking. In fact, as he says himself its “as traditional as it gets” given the winemaking history of Burgundy.

It’s important to understand how very unique their operation is. Mounir sums it up so well when he describes their dream of creating “a library of some of the greatest 1er and Grand Cru vineyards in the Cote d’Or, every vintage”. It’s an incredible array of some of the most sought after sites in Burgundy. They are a ‘micro-negociant’, buying between one to three barrels of each site, sometimes making over 50 different Cru’s.

Lucien le Moine was founded in 1999, a partnership between Mounir and his wife Rotem.

What does Lucien le Moine mean? The Enlightened One, a tongue in cheek tip of the hat to his origins. Mounir, the name of the founder is Lebanese and in their language Mounir means ‘light’, the french equivalent is Lucien.

Rotem comes from a cheese making family, studied agriculture in Dijon and after taking a national prize from the French academy of Agriculture for her study of the Cote d’Or she focused on wine full time. It’s important to note has a seriously good pallet to match, they make quite the couple.

Each year this selection can change based on what they taste. Of course some of their grower relationships have been established over last 20 years so each year it’s mix of wines I have come to love/expect them to be bottling and some new ones.

A common question I am asked is how do they source such iconic vineyards and how do they choose new wines each year. If you have or ever get to meet Mounir he is one in a million, a man of rare talent, both highly intelligent and charming all at once. Andrew Jefford put’s it best with this quote; “I know of no one in Burgundy who speaks with more passion, articulacy, exuberance, irreverence and sometimes wild poetry about different vineyard sites than Mounir Saouma”. The distinctive style and critic acclaim of Lucien le Moine’s wines along with Mounir’s personality has undoubtedly meant many growers genuinely want Mounir to vinify their grapes despite him being a relative newcomer in Burgundy, they are of course proud vignerons of some of the most sought after grapes in the world.

Mounir seems to so often be labelled a ‘modernist’ due to his long elevage technique, lack of sulphur use during elevage and no racking hence a lot of work with the lees. In fact, as he says himself its “as traditional as it gets” given the winemaking history of Burgundy as explained further below.  They visit growers and taste the wines very early just after the press, in the case of whites taking the juice straight to barrel and the reds working alongside the grower with the vinification process of the primary ferment.

First off it’s important to understand the pressing and lees component. He specifically asks for all pressings, both white and red to be with full lees, no racking prior when he collects the juice from his growers (in the case of the red’s post primary ferment), thus what he calls ‘dirty juice’. He travels from grower to grower with his specific barrels, filling them with the pressings including every last drop of lees. This may seem now common place with progressive winemakers but back in 1999 not to rack pre fermentation was very unusual in more modern winemaking circles.  To put in context it would be fair to say ‘most’ wineries use between 1 to 2 litres of gross lees,  he wants at a minimum 5 to 7 litres of lees in each barrel.

Why do they use so much lees? Mounir often uses the simplest example of cloudy/with bits Orange juice vs filtered, who can argue which one tastes better. He believes so much of the soul/terrior of each site is contained in the lees of the pressings, brings a added dimension of texture to the wines. The other key reason which is explained below is they help protect the wine during long aging without sulphur. 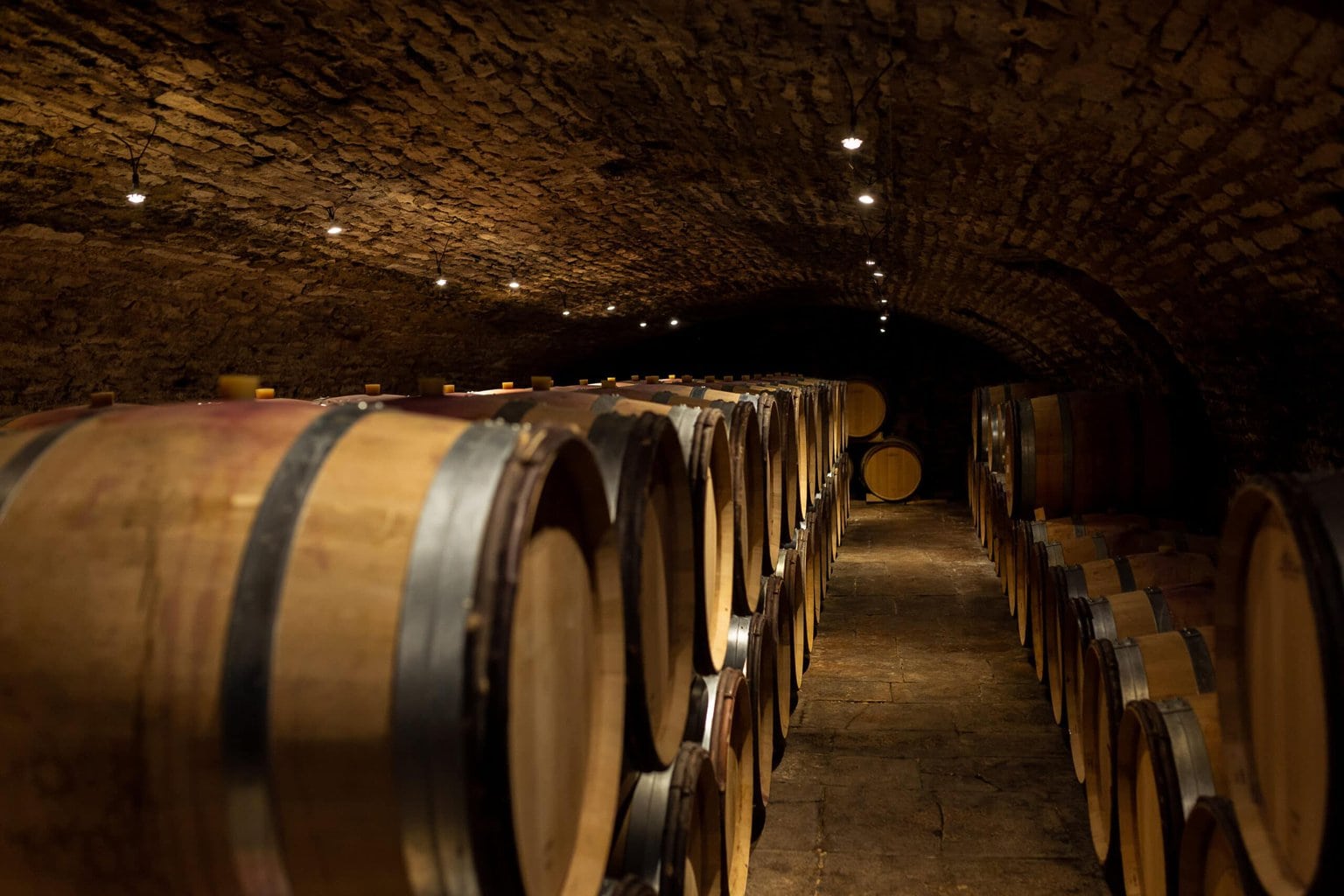 When Mounir and Rotem started planning to start Lucien le Moine a key element to this was finding the right cellar, most importantly one that was naturally humid and very cool. One of the key ideals of Lucien le Moine is the attempt to replicate the ‘traditional’ ways of making wine in Burgundy which was very hands off. Before the ‘LOFI’ or natural wine movement poked it’s head the monastery’s of Burgundy were employing such techniques simply due to mitigating factors such as a colder climate and that they didn’t have the time or technology to mess about with the wines during ferment and elevage. To better understand this I’ve summarised the key aspects.

Climate – Harvests in Burgundy were much later than they are now due to global warming. Picking grapes in October meant pressing your wines to barrel and often having to wait until the following Spring for your fermentations to finish simply due to the fact the cellars/climate was too cold to allow the yeasts to ferment the sugar + malolactic fermentation to begin. This meant a much longer period of fermentation. Often at Lucien le Moine you visit in the following year and the white ferments are still going on over 12 months from harvest. They ‘close’ their cellar throughout spring to retain the humidity and low temperature, pushing the malolactic/elongating the process.

Time = Texture – Rotem teased me once by asking if I’ve ever racked a barrel using a hand pump. I went a rather deep shade of red and admitted I hadn’t had the pleasure. She reminded me that it can take up to 1.5 hours to do. She was making a point. Early winemaking in Burgundy and the ways of life at the time meant Monasteries/early Domaines weren’t regularly racking their wines, it was simply a-lot of work. Wine was left on lees for the full aging process. Lucien le Moine’s wines have very long elevage, up to 25 months in some cases on full lees, giving the wine time to ‘feed’ as Mounir puts it on the lees, adding texture and complexity. Regular battonage takes place (dependant on vintage) to further help the lees contact with the wine. A common signature tasting note of Lucien le Moine’s white’s for example is ‘dry extract’, that texture of tart/dryness/mouthfeel that is in part from the extended lees contact.

No Sulphur during aging – Sulphur is only added during the initial pressing/collection of juice. Wines are made under no sulphur and for the entirety of their elevage (let’s remember this can be up to 2 years), relying on CO2 and the large qty of lees to protect the wine. Again by not racking it allows the wines to retain a-lot of natural CO2 present from the fermentation that would normally dissipate when moving from barrel to barrel/tank. Mounir has often reminded me by making the wine ‘a friend of oxygen’ ie not putting a blanket of sulphur over it when it’s in it’s infancy is a key component for him in the ability for the wines to shine/age.  Sulphur is added at bottling but in small amounts with larger than normal CO2 in still wine, left from the elevage. No fining or filtration, bottled by gravity.  An important note for all Lucien le Moine wines is to double decant them due to this higher level of CO2. They are not fizzy :), just helps them open up.

Almost all of Lucien le Moine’s wines are fermented and aged exclusively in barrels from the Jupiles forest, sourced just north of the Loire Valley. It’s a very tight grain wood. Sourced from the cooper Stephane Chassin with a very low toast